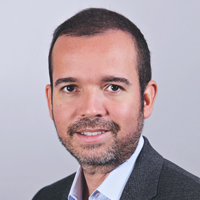 Antonio is the founder and CEO of the SGO group.  He grew its core business, Smartmatic, from a startup in 2000 into the global company it is today, leading the electronic voting industry.
Since those small beginnings, Antonio has been responsible for Smartmatic’s long-term business strategy. He has managed mergers and acquisitions in the US, South America, Europe and Asia that have been the key driving forces behind the company’s growth.  He has positioned Smartmatic as a trusted partner to electoral commissions and empowered people all over the world to participate in technology-enabled citizen engagement. Committed to continuous product innovation, Antonio also oversees four R&D centres in the Americas, Europe and Asia.
Antonio has been responsible for many Smartmatic’s significant achievements, from the world’s first fully verifiable automated election to the world’s fastest biometric registration project.  Antonio holds 13 issued patents in the United States, with more under way.
Antonio complements his work with other interests, such as music and writing. His children’s book Hukiti-Tukiti-Ta has been awarded the prestigious Moonbeam Children’s Book Gold Medal in the Spanish Language category. As a Trustee for the Smartmatic Foundation, Antonio is committed to philanthropy alongside his entrepreneurial activities.
He holds an electronic engineering degree from the Simon Bolivar University in Caracas (Venezuela).